viOLet has routinely struggled to find his place in the WCS scene after being the first Korean to obtain a US visa. Much like 2015, 2016 was an unspectacular year for viOLet; he wasn't necessarily bad, but he did not have much to lean on outside his sharp mirror matchup. As one of the only players here without a major accomplishment, viOLet has a lot to prove.

Throughout 2016, the running theme for PtitDrogo has been ‘coming close’. After his DreamHack Leipzig victory as the first global champion of 2016, PtitDrogo has been just barely faltering at the very last second in every tournament, even when victory was within his grasp. Thanks to Polt’s abrupt forfeiture, the French Protoss player has been given one last chance. Will he surpass expectations at BlizzCon or throw it all away yet again?

Who would've thought that Elazer would be one of the six non-Koreans at the Global Finals? In 2015, an upset over ShoWTimE—who was significantly less solid back then—was just short of a miracle, while in 2016 a 3-0 over the same player in the WESG qualifiers came as barely even a surprise. This year has been one gigantic step from Elazer, turning him from underdog to credible threat.

Coming in as the only non-Korean to have won a Circuit Championship, ShoWTimE has in some ways failed to live up to lofty expectations. He faltered hard in Montreal—showing exactly how hard it could be to keep the crown in a cutthroat scene—and while he certainly looked better at WCS Copa Intercontinental, he didn't find another championship there either. Even so, ShoWTimE has routinely showed up as one of the best non-Koreans in terms of macro play and has developed a sufficient proficiency with early aggression to make him dangerous going forward.

It might've demanded a miracle, but TRUE made it happen. In one of the greatest upsets of 2016, TRUE went from getting beat up by HeRoMaRinE at HomeStory Cup, to crushing Polt and Snute—two of the most prolific and skilled players out there—in Montreal. Past this, even his relative under-performance at KeSPA Cup still saw him eliminate herO, a highly accomplished player in his own right. It’s often hard to tell where TRUE stands, but this chaotic nature might be a blessing as he faces the titans of the Korean scene at BlizzCon.

While he hasn't quite reclaimed his ridiculous 2013 stature, Dear's 2016 run has put him back in high regard. He reached the semifinals of both GSL seasons, beating Patience, Maru, and TY in the first, and besting sOs and TY in the second. He isn’t consistently able to get quite far enough to turn heads, settling for good—but not amazing—performances.

Snute's 2016 has been a year of highs and lows. For one, he's disappointed in the WCS Circuit Championship twice, both against Guru and TRUE in the Round of 32. But he also made three finals, winning WCS Copa Intercontinental in an astonishing series against ShoWTimE. Throughout all this, he has remained one of the most dedicated and passionate foreigners. He remains the type to never waste a good opportunity to show his skill, especially in his historically strong ZvP matchup.

Unlike most players on this list, Zest was seen as an inevitable top-8 contender until a few months ago. For the first months of Legacy of the Void, Zest was a god amongst men. He won GSL, he dominated Proleague, and then…he stopped. Players who should have been easy pickings rose up to fight, most prominently when Patience broke him in the recent SSL playoffs. If Zest can move past the jitters that saw him disappoint against INnoVation last year, he can still retake the year that looked to be entirely his.

Nerchio epitomizes the foreign scene right now. He's talented for sure, and has a solid grasp of macro play—especially in engagements—but falls short of being truly great. What separates him from his peers is that we've seen his skill against Koreans before, so there's not that much uncertainty at play. Widely recognized as the second best non-Korean player, Nerchio should have a decent performance here; but it's not out of the question that watching Neeb's victory sparked something inside of him and he shows up far bigger than expected.

Somehow, Patience has gone beyond just recreating his 2013 DreamHack Winter performance to legitimately becoming an international threat. He has an understanding of PvP that few can match, and he is hardly a slouch in the other matchups. It feels unintuitive to call him a top-tier player, but he boasts a track record that is making it feel more natural almost by the minute.

Five months ago, Stats looked poised to become the best Protoss player in Korea. Coming off a narrow loss to Dark in the SSL Season 1 finals, he recuperated with revenge in the Cross Finals; simultaneously, he enjoyed a stellar Proleague run, a 4-3 triumph over TY in Kung Fu Cup Season 1, and a top 4 finish at KeSPA cup. With Zest tripping over his feet and Dear unable to transcend “unerringly consistent”, many people are ready to hop onto the Stats train.

Throughout the lifespan of LotV, TY has been THE Terran player to look up to. With his consistent results and intelligent play, TY has inspired Terran players from all over to emulate his style. And while ByuN has recently taken over the title of top Terran, TY still showed he was as solid as ever; in KeSPA Cup, he shellacked Zest 3-0 while ByuN floundered against the same Protoss opponent with a 1-4 score. But TY has also been cursed with a lack of results to back up that obvious fact. A flurry of semifinal placings would placate your average Terran, but a player of TY’s caliber hungers for more. Only the championship will satisfy any lingering doubts in his mind.

Returning from his mysterious pseudo-retirement, ByuN is one of the few examples of the so-called online warrior actually translating his online prowess to offline environments. His run through GSL Season 2 saw him almost become the indisputable best player in the world, but he fell from that height just as fast. He lost a big match against Zest in KeSPA Cup and faltered in a tight set against Dark in Cross-Finals, allowing Neeb to steal the spotlight completely. Steadily and unrelentingly, ByuN’s competition is growing stronger, and BlizzCon will show if he can prove he is still the king he made himself seem when he won GSL.

Solar’s journey began a year ago when he was one of the best players in the world back in the very early days of the new expansion. The floodgates really opened with a bit of an upset win over PartinG in DreamHack Winter. But as others caught up, he began to blend into the background, one among many. Now he’s finally made an enduring name of himself with a StarLeague trophy. Solar’s rise to fame has been almost meteoric, and it’s precisely because of that speed that it still feels a bit odd to say this: if Solar shows up strong, he's a favorite to win BlizzCon.

It’s been sixteen years since a non-Korean won a StarCraft tournament on Korean soil, but just a short time ago, Neeb repeated that seemingly impossible feat. He won KeSPA Cup after going an entire season without seeing a single WCS championship. Not only did he win the tournament, he won while consistently looking like a legitimate top contender. The excitement that surrounds him is undeniable and inevitable: he has raw skill, coupled with more momentum than anyone else. With the weight of an entire foreign scene on his shoulders, this is his time.

Dark is the final boss of the StarCraft scene. He dominated SSL Season 1, losing four games across the span of the entire tournament. He beat Zest, TY, and Classic to only to lose in a razor-edge finals against Solar in Season 2. He then got to exact sweet revenge, beating Solar a mere two weeks later at the Cross-Finals. Dark is the rare player who can both promise glory and muster the skill to make good on his promises. In 2015, he dreamed of a fate more glorious than any other, of winning almost twice as many championships as anyone else. In 2016 he has made it look possible, and it's almost unthinkable to not consider him the favorite going into BlizzCon. 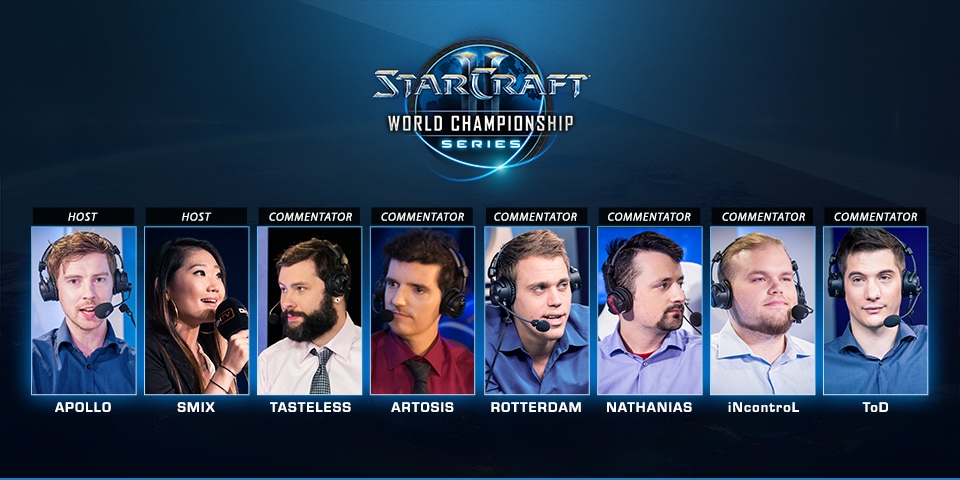 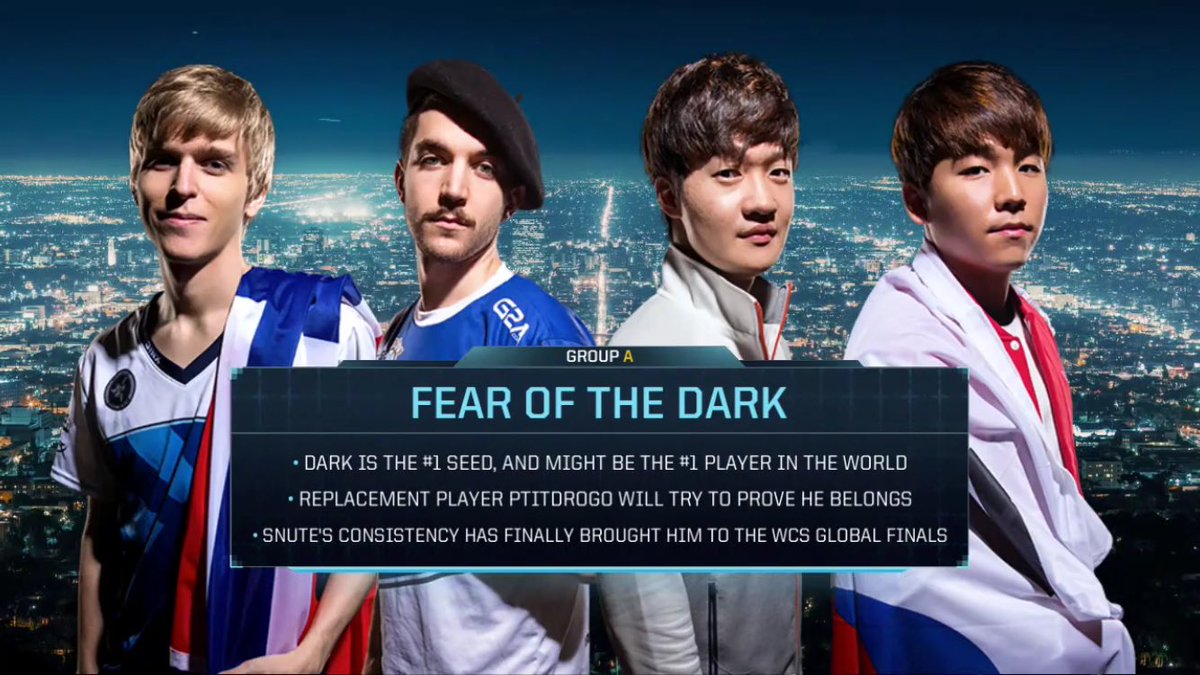 "In the past I used to play outside. But when I grew older, I realized sitting inside playing games is far superior."

Our Neeblet, Who art a Protoss, Hallowed be Thy Game; Thy adepts come, Thy warp be done, on Earth as it is on Auir. Give us this day our daily BM, and forgive us our F2+A moves, as we forgive those who F2+A move against us; and lead us not unto rage quit, but deliver us from Ultralisk. For thine is the Nexus, the Pylon, and the Gateway, now and forever. Amen.