[Weekend Warfront: Battle at the Cairn] 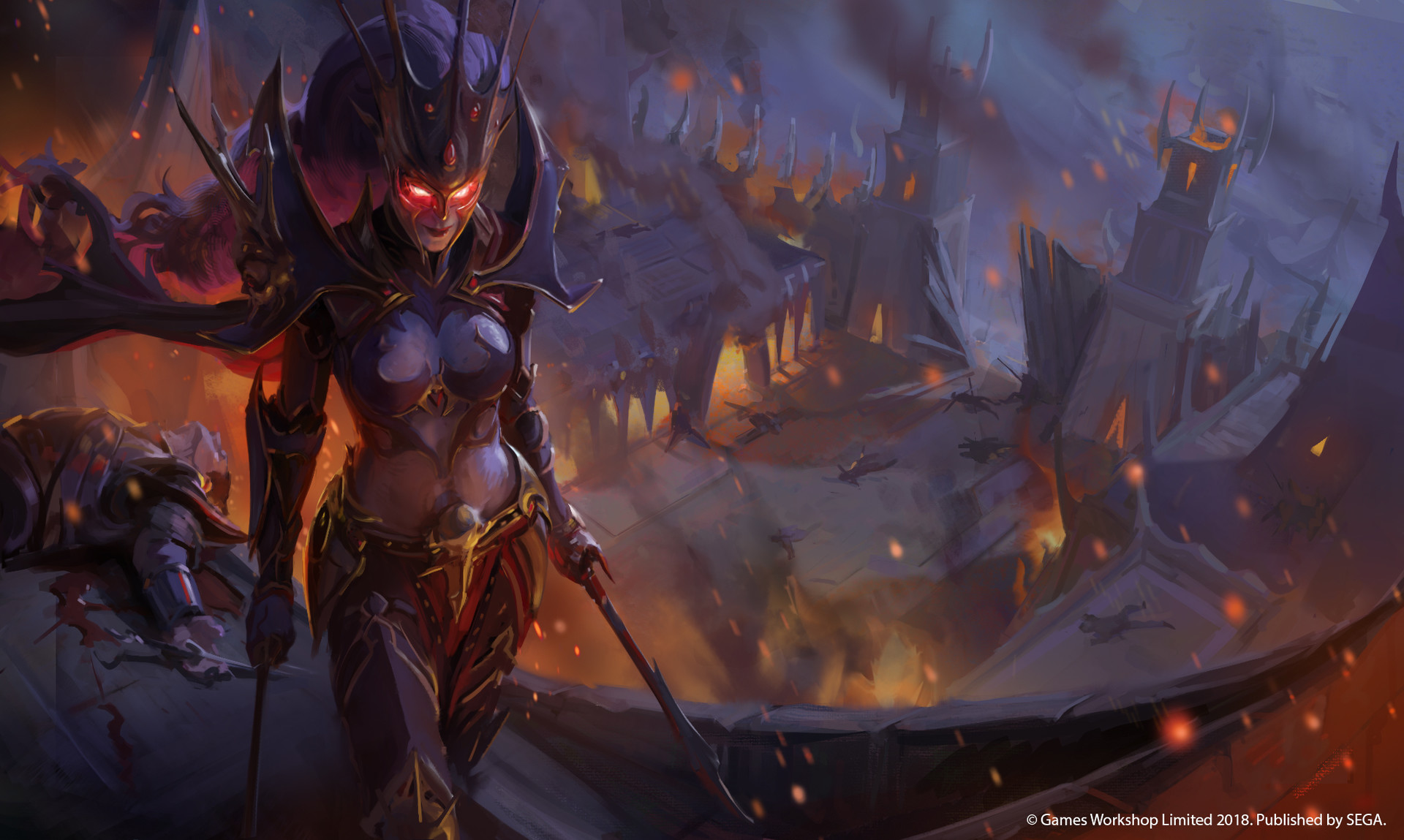 The land of Ulthuan seems to have been built on tragedy. Some tragedies come from without, and are guided by neither malice nor whim. Others are manufactured and forced upon their victims like deadly poisons. The tale of the Brothers Blackcairn, Elthryril and Lothelryel, is one such tragedy. Lothelryel made a pact with Morathi to betray his brother, Elthryril. Using Morathi's magics, Lothelryel sought to take control of his line and follow Malekith. Yet it was Lothelryel who was deceived. The magic that would have imprisoned his brother entrapped both of them, even as their blades guaranteed their mutual destruction.

In places the rage and hatred of familial betrayal have seeped into the land, turning the sites of ancient struggles into magical wellsprings of dark power. Now a new battle erupts as Order and Destruction forces vie for control of the Blackcairn Estate.

This weekend the Battle at the Cairn will be the weekend warfront from 12:00 on Friday to 12:00 on Monday Altdorf time. You get +50% XP and Renown in the Blood of the Black Cairn scenario, and extra rewards from completing the event tasks.

Additionally, the rule set for the scenario has changed:

A new update to the launcher is being deployed and will be phased out to players. If you have issues in the upgrade process you can always download the latest version of the launcher from ( http://launcher.returnofreckoning.com/RoRLauncher.exe )

-Added some BO scout quests to T1 dwarf and greenskin.

Today Return of Reckoning is 6 years old. It's quite crazy to look back and see how far we have come. When we first opened our doors we only had Empire vs Chaos T1 open, basic ORvR mechanics, level cap of 12, Nordenwatch was the only scenario and a player cap of 50 (See early videos here and here). Fast forward to 2020 and we have had Keep battles with over 1,000 players in, almost 4,000 concurrently connected players, over 300,000 registered accounts, over 1,000,000 characters created, over 1,000,000 scenarios played, over 30,000,000 items, over 100,000,000 Tome of Knowledge Unlocks and over 1,000,000,000 player kills. It's quite something. However we wouldn't have come this far if it wasn't for the amazing volunteers who have contributed a lot of their free time to bringing back this amazing game and the massive amounts of passionate players who make it all worth while.

For years blood has been shed and the war rages on. Any glimmer of total victory disappears in the blink of an eye, or in layman's terms, as fast as it takes for a [sorceress/bright wizard - realm dependent] to kill you. Instead we noble soldiers chase victory like a squig chases its target into the distant unknown. The madness continues, and in a mad world the mad reign as kings.

The tide of madness surges from the Chaos Wastes across the Old World. Will you confront madness and overcome it, or will you be the next of its victims?

The +50% XP & Renown Buff will be active in all Empire vs Chaos pairings and the Twisted Tower Scenario.

Within the farthest reaches of the Chaos Wastes resides the enigmatic Twisting Tower. Battle for control over both the Atrium and the Loft to secure the tower and earn points for your realm. Controlling the tower will reveal the Oculus of Change which your realm can seize to earn extra points but beware of the Changers Gaze!

This is a test, if we see it has negative effects on the game we will remove or change it.

The reasons for this change is that there has been an increased meta around coordinated AoE morale dumps in larger scale fights, which makes wounds the only defensive stat that really matters. Our hope is that this brings more diversity into tactics employed, while still keeping morale damage abilities as a powerful tool.

note : Due to some late skin rework, some icons may not reflect final appearance. A post to show final look : viewtopic.php?f=65&t=38844

Shadow Warrior changes have arrived. These changes are aimed (haha) at giving ranged Shadow Warrior specs a bit more love, something long overdue. Naturally we will be keeping a close eye on how these changes perform.

Squig Herders are coming up next, but we're going to give it at least a week before we get started on their changes.

Please provide theorycrafting and feedback about these changes on the forums after thoroughly testing them of course.
Spoiler:
Scout Tree

Several abilities now have a "While Vengeful" modifier below

This is subject to change.

New Public Quest currencies have been added for each tier. PQs in higher chapters in each tier will award higher amounts of currency.

For these new currencies you can buy the Carnage, Havoc, Mayhem and Ruin sets. The vendors are located in the east war quarters in Altdorf and the Pavilion of Slaanesh in the Inevitable City. Same location as the previous Ruin gear vendors.

Blue Heal and AP pots for each tier is also available from the same vendors.

The currencies can also be used to buy lvl 200 containers and blue talisman fragments.

The old Ruin currency has been removed and can be traded in for the new tier 4 PQ currency.

During Boss fights, you will see a new UI element; something we, in the office discord, lovingly refer to as the Win-o-Meter. A horizontal bar represents the total number of points possible in the current boss fight. Shields above and below this bar indicate your realms’ progress: the farther to the right the shield is, the greater number of points your realm has earned. At the end of a Win-o-Meter enabled fight, the side with the most points wins! Points are earned by killing enemy players, healing friendly players and by damaging the boss. [1]