Around the same time, someone in Snizhne is filming the Buk driving south, in the direction of Pervomaysk, on its own. According to the JIT report, "at 2:07 p.m., Kharchenko orders Sharpov temporarily to guard 'the vehicle', and then goes to meet Gilazov (another rebel) at Furshet supermarket himself."

At that point, Dubinsky is in Donetsk, on the phone talking to other commanders about operations at other locations on the front. At 4:19 p.m., a missile is launched from the field near Snizhne. A little under a minute later, it explodes next to the cockpit of flight MH17. Not long after that, reports appear on social media about a missile and explosions.

Nearly half an hour later, Kharchenko reports to Dubinsky that they have downed a Ukrainian combat aircraft: "We are on the spot. We have already brought down a 'Sushka'. Dubinsky: "Well done, big guys! A 'Sushka'! Well done." But Dubinsky's thoughts are elsewhere, and he immediately switches to what is bothering him: "Lonya, tell me, have I ever done any fucking thing to hurt you? Fuck!"

Dubinsky is furious about a bunch of armed men outside his door: "I don't know why I myself or my security haven't gunned them down, what a cock-up!" Once he is done raging, he orders Kharchenko to return to Donetsk: "You leave a battalion behind to guard the Buk, and then you will probably come this way. ( ) and Gyurza will come this way too. I'll call you right back." Kharchenko: "Understood, sir."

Less than 30 minutes later, the two men have further contact. Kharchenko reports artillery bombardments near Marinovka. "Did you put the Buk well in place? Will it not be shot to pieces?" Dubinsky wants to know. "No, they can't reach it. We are out of their reach anyway."

An hour later, Dubinsky calls a unit in the northern area controlled by the separatists. Botsman: "A place has been downed here near me. I'm on my way to the boxes now." Dubinsky has no idea what Botsman is talking about and repeats Kharchenko's claim that they have downed a Ukrainian combat aircraft. "We have now also brought down an aircraft, a Sushka", says Dubinsky. "The enemy is trying to break through", but "thank god, the BUK-M arrived this morning, so it's easier now."

He also expects support from Russia. The Ukrainian army is close to the Russian border and is striking at the separatists in Marinovka from that position. "Now we wait for the Russians who should be firing at their position from that end."

Two hours later, Dubinsky still does not know what has really happened. That becomes clear from a conversation with someone who indicates that he is being bombarded by journalists with questions about a downed Boeing.

John Doe: "I am getting calls from journalists telling me that a Boeing has been shot south of Donetsk." Dubinsky: "Is there a fight going on?" (Dubinsky probably mistakes 'Boeing' for 'boj', the Russian word for fight) John Doe: "Boeing! There's been a plane crash." Dubinsky: "Ah, our people have brought one down over Savur-Mohyla, near Marinovka, our people have brought down a 'Sushka'."

It still hasn't dawned on the commander of the whole operation that, two hours earlier, flight MH17 was downed, with 298 casualties. Shortly thereafter, he gets a phone call from the assistant to Girkin, the Minister of Defence, ordering him to report immediately. On his way to the meeting, he calls his girlfriend, who is cooking dinner. He can't make it. "It's boring with daddy not there, isn't it?"

After the tête-a-tête at Girkin's office, Dubinsky is suddenly worried about what has transpired. Around 8:00 p.m., he calls his deputy Pulatov. He wants to have clarity about who has shot what. Dubinsky: "Tell me, did or did not our BUK fire?" Pulatov: "The Buk has brought down a 'Sushka'." Dubinsky: "So..." Pulatov: "But before that, the 'Sushka' downed the Boeing. They tried to blame us for that."

Two minutes later, Dubinsky repeats this story to his boss, Igor Girkin. The Minister of Defence of the separatists, addressed by Dubinsky by call sign Number One. Dubinsky: "So, here's what happened. A 'Sushka' hit a fucking Boeing. After that, the 'Sushka', as it was on its second round, was brought down by our BUK. And lots and lots of our people saw that. Gyurza just reported that."

Not much later, Pulatov and Kharchenko both call from the MH17 crash site. Dubinsky himself now also seems to question the story that his subordinates have reported to him. When Kharchenko calls from the crash site asking if they should give the OSCE access, Dubinsky also asks him who has downed the Boeing: "You did observe that it was brought down by a 'Sushka', or was it ours after all?"

Kharchenko "Not ours, Nikolayevich, not ours." Dubinsky: "So a 'Sushka' then? And then after that, the 'Sushka' brought down by our Buk, right?" Kharchenko: "Yes, first there was a bang up there, and then there was our bang."

It was a Ukrainian combat aircraft; that's also what the separatists keep telling each other. They lay the foundation for the story that, a few days later, will also be officially embraced by the Russian Ministry of Defence. It will soon become clear that the evidence submitted by the Ministry in that respect is false. Russia will later switch to a different theory: flight MH17 has not been downed by the separatists, but by a Buk from the Ukrainian army.

At 8:30 p.m., five hours after flight MH17, Dubinsky calls Girkin. The Minister instructs him to take the 'box' to the border with the neighbouring Lugansk region. Dubinsky and his men control a large part of the Donetsk region, but the only route to Russia leads through the Lugansk region, which is controlled by other rebel forces.

Meanwhile, Kharchenko reports that the 'box' has left the launch site on its own and is headed for Snizhne. A town not far from the launch site. At 10:30 p.m. he calls Dubinsky again. Kharchenko: "Where does it go, where should I escort it to?" Dubinsky: "Up to the border with the Lugansk region." Kharchenko: "Aha." Dubinsky: "And then that's it. Clear?"

But 45 minutes later, the Buk is still in Snizhne, at less than 10 km from the original launch site: "They don't know the way, nobody knows anything." 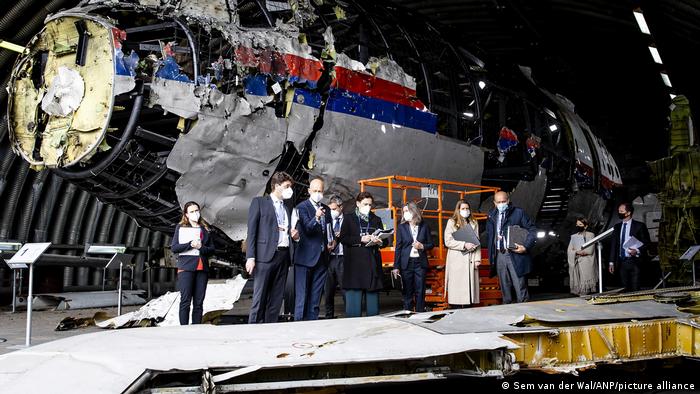